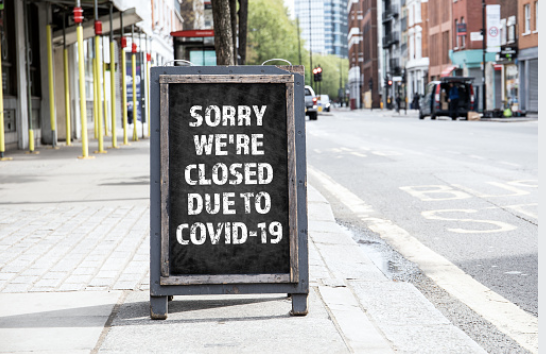 Despite the small lifeline thrown by the federal government and state agencies, small and medium-sized businesses are closing permanently at a rapid pace. Souplantation and Sweet Tomatoes were a chain of 97 all-you-can-eat buffets. The parent company, Garden Fresh Restaurants, announced in early May that all locations are closing permanently. John Haywood, CEO of the company, told Restaurant Business that post-COVID FDA regulations related to self-serve food models made it impossible to keep the restaurants running. Gold's Gym, J. Crew, Neiman Marcus and JCPenney are some other well-known companies that recently filed for Chapter 11 bankruptcy.

Small business closures have ripple effects across the economy. A joint survey by University of Illinois and Harvard researchers in May concluded that more than 100,000 small business had already shuttered permanently. Not only does that destroy the livelihood of business owners, but also hundreds of thousands of workers. Department of Labor data shows 45 million jobless claims in a 13-week span since the COVID crisis began in March.

The Bay Area has seen its fair share of small business closures, particularly restaurants. Here's a list of some staple eateries that are no more.

Bica Coffeehouse had been part of the Oakland community for nearly a decade. The company wrote on April 7 via Instagram that it had a great run but "sadly that run has come to a halt after nearly 10 years." Tertulia Coffee was another Oakland cafe known for displaying art by people of color. It closed for good in March.

Lalime's was a go-to spot for Mediterranean food in Berkeley. Owners Cindy and Haig Krikorian announced on Facebook in April that COVID-19 is forcing the restaurant to close after 35 years. Emperor Norton's Italian Restaurant and Pizzeria was a local favorite in San Jose. The company closed for good on April 26 after 45 years in business. Doug Savage, a former employee, told NBC Bay Area that he's losing his second home while the community is losing a staple presence.

Ristorante Franchino had been a North Beach staple for 32 years. The company announced via Instagram that it would not be reopening when shelter-in-place orders are lifted. The owners said they could not come to an agreement with their landlord on the lease, which expired on June 1. Specialty's Cafe and Bakery had 55 locations in three states, including one in downtown Pleasanton. The company announced on its website that COVID-19 "decimated revenues" and all locations would close.

Other companies hanging on

The Station House Cafe at Point Reyes Station got a temporary scare in May. Owner Sheryl Cahill said via Facebook that the landlord nearly quadrupled her rent, forcing her to close at the end of the month. But a flood of negative emails towards the property owners apparently made them reconsider. The cafe remains open. St. Francis Fountain, known for its brunch menu and shakes, may disappear from the Mission District. The website says its closed "for the time being." But the owner told the San Francisco Chronicle that the city is unfriendly to small businesses and that COVID-19 was the nail in the coffin.

Eco Office has been doing its part in helping small business stay afloat. We've been offering essential services throughout the shelter-in-place orders, particularly partitions to promote social distancing and plexiglass barriers for myriad applications. Whether you need plexiglass shields for cashiers, your cubicle retrofitted, or any other application, we have the solutions. Give us a call today at 408-437-1700 to discuss your needs.