Don’t call it a comeback: cubicles returning to offices

Posted on 9th May 2020 in Cubicles, Open Office Furniture 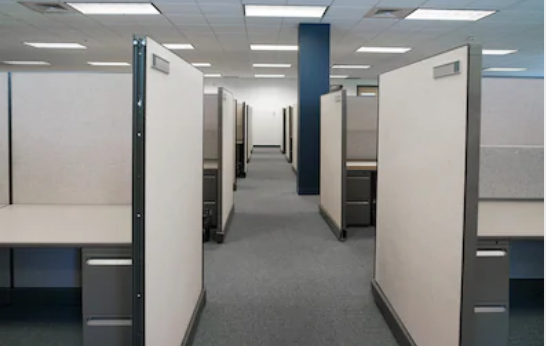 We've written several articles in the past two years about the ongoing debate between open office furniture and cubicles. Managers and C-Level executives like open office to encourage collaboration and eliminate barriers between workers. Meanwhile Millennial and Gen Z workers are more content with open office layouts then Baby Boomers and Generation X, who are less than enthusiastic about it. The COVID-19 pandemic is resolving the issue for everyone.

There are no definitive numbers as to how many Bay Area companies utilize open office furniture and layouts. But the International Facility Management Association found in a 2010 study that 68% of respondents worked in offices with no walls or very low walls. Bay Area tech giants Google (Alphabet) and Facebook are trendsetters in many ways, including office layouts. It's safe to say the numbers from 2010 have increased substantially due to these and other large firms adopting open office.

Despite corporate enthusiasm, open office spaces have not produced the desired effects. A 2019 Harvard study found that face-to-face interactions dropped by 70% when companies adopted open office layouts. Email and other digital communications increased by 50%. Companies have been stubbornly steadfast, however, about these floor plans regardless of contrarian, empirical information.

Six Bay Area counties extended stay-at-home orders until May 31. Most non-essential business are still closed until further notice. But construction, landscaping and some outdoor activities were allowed to resume on May 4, with safety caveats. Bay Area workers will not return to the office until at least June. But now is the time for companies to start preparing.

Many companies defied trends and kept cubicles in their offices for either aesthetic or operational reasons. TCubicles were called obsolete and out of touch just a few months ago. These firms appear prophetic now that coronavirus has gripped the entire planet.

Bay Area companies are re-installing cubicles as we speak. Operations will be different when companies are allowed to reopen next month. Social distancing, sanitizer and latex gloves are likely to be the new normal until further notice. Installing cubicles before your office reopens eliminates one new hassle. The entire process can be done in a day for smaller companies. Larger firms are especially encouraged to get the ball rolling immediately. Outfitting several floors with hundreds or thousands of cubicles takes time.

Cubicles were the norm from the 1960s until the turn of the 21st century. It appears they are being resurrected from the dead thanks (or no thanks) to COVID-19.

Young companies have likely only known open office layouts. That means workers must adjust to the new environment with dividers between themselves and their coworkers.

Cubicles are not private offices. In fact cubicles create a false sense of privacy that does not really exist. The work environment is still very much open. While physical barriers may partially muffle the noise coming from your neighbor, it does not block it entirely. Furthermore, managers and Human Resources have the responsibility of maintaining office culture. Larger cubicles for certain employees gives the impression of higher importance. Company cultures promoting equality among workers and management must take care to ensure all cubicles are relatively similar in size.

Eco Office is open for business during the COVID-19 shutdowns. We are not only outfitting offices with new cubicles, but also retrofitting existing cubes with plexiglass safety barriers and cubicle sanitary dividers. Give us a call today at 408-437-1700 to discuss your office preparation needs.