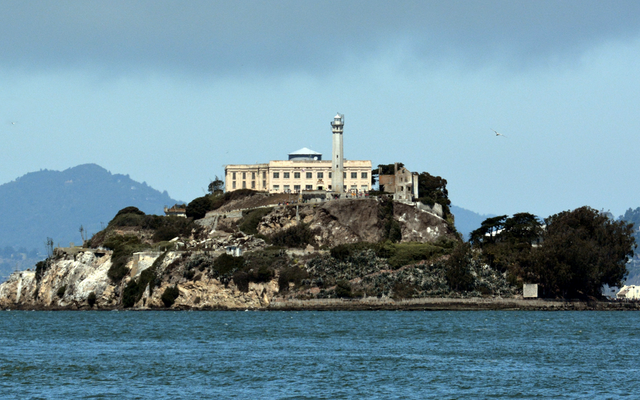 Frank Lee Morris was sent to Alcatraz Federal Penitentiary in the San Francisco Bay on January 20, 1960. He had escaped from another prison and was recaptured. John Anglin was sent to Alcatraz on October 24, 1960. He had attempted escaping several federal prisons. His brother Clarence Anglin arrived at Alcatraz on January 10, 1961. All three men were serving 10-15 year sentences for robbery and burglary. But all of them served their last night in Alcatraz on June 12, 1962. They swam, with the help of a makeshift raft, 1.5 miles from Alcatraz to Angel Island. The story from there is anybody's guess.

The daring escape and improbable swim across the San Francisco Bay inspired the Escape from Alcatraz Triathlon 20 years later. The first event was held in 1981. The course consisted of the 1.5 mile swim from Alcatraz to Aquatic Park in San Francisco, a short run, and a 20-mile bike ride. The event was televised for the first time in 1989, which introduced it to a much broader audience. The course changed thereafter to accommodate television production. The 20-mile bike ride was reduced to 18 miles. The 18-mile run was reduced to eight miles. Both events were contained to the city of San Francisco for logistical purposes.

Registration opened for the 40th Annual Escape from Alcatraz triathlon on September 5. It will take place on Sunday, June 7, 2020. That date also marks the 58th year of mystery surrounding the three aforementioned convicts' escape from the maximum security prison.

Swimming across the Bay

The 1962 escape from Alcatraz prison was intriguing to the public because most believed it to be impossible to swim from the island to the mainland. The general belief was that the waters were infested with man-eating sharks. But Leopard sharks and Sand sharks are the preeminent species in the Bay. Both are completely harmless to human. A 2014 study published in the science journal PLOS ONE estimated that there were 2,400 Great White sharks in the "Red Triangle" between Bodega Bay and Monterey. But the man-eaters typically stay out of the Bay because the water is less salty. The strong currents and cold temperatures (55 degrees Fahrenheit) of the San Francisco Bay also make the swim extremely difficult.

A total of 36 men tried to escape Alcatraz and swim across the Bay to freedom. But only 31 of them have actually been accounted for in the aftermaths. Theodore Cole and Ralph Roe used a file to get through a window and out to the water on December 16, 1937. They were never found thereafter. Federal authorities listed them as "presumed dead" due to a strong storm the night of the escape. Prison officials believe Cole and Roe were swept out to sea and drowned due to the currents.

The story of Morris and the Anglin Brothers is different. Evidence points to them actually surviving and escaping. Their makeshift raft was found on Angel Island the next day. There was also a report of a carjacking involving three men within 48 hours of the escape.

Nobody can say for sure what happened to Morris and the Anglins. The one conclusion that can be drawn is that the escape inspired others to make the same swim.

The Escape from Alcatraz Triathlon is capped at 2,000 participants each year. This is due to the limited number of kayaks and lifeguards in the water during the swim. Most entrants are selected by a lottery system. The remainder are chosen through a qualifying process. Olympians like Paula Findlay and Ben Kanute were in the 2019 field. Kanute won the last three events on the men's side. Ashleigh Gentle is the defending champ for the women.

Registration for the 2020 events closes on November 18.