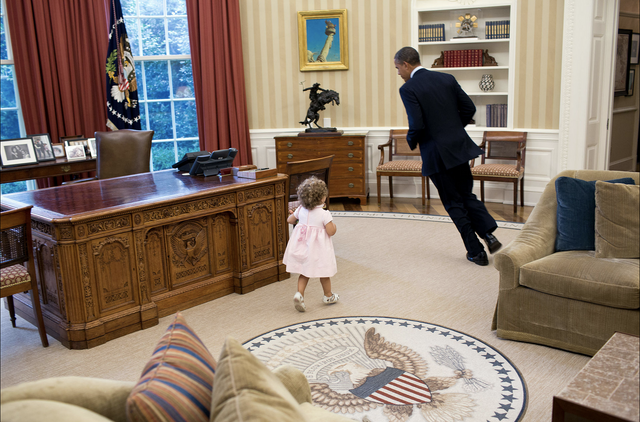 Former President Barack Obama being chased around the Resolute Desk by a child.

The White House, at 1600 Pennsylvania Avenue in Washington DC, has been the official residence of the President since John Adams. That of course begs the question, "where did George Washington" live? Washington first lived at a private house at 3 Cherry Street in New York City. He moved to 39-41 Broadway in 1790. That residence was called the Alexander Macomb House and was large enough for George, Martha and their staff.

The Residence Act of 1790 mandated that a permanent national capital was to be built near the Potomac River. A temporary executive residence called the High Street Mansion was established in Philadelphia while the White House was being built. Washington lived there until 1797 when John Adams was elected President. Adams also took residence there until November 1, 1800 when the White House officially opened and became the President's official residence.

The White House provided all new meanings to the terms executive desk and executive office chair. The Resolute Desk is perhaps the most famous workspace in U.S. history. Queen Victoria of the United Kingdom gave the desk to President Rutherford Hayes in 1880. It was a fixture in the White House through several administrations. It was removed from the White House after President John F. Kennedy was assassinated and taken to the Smithsonian as an exhibit, according to White House records.

President Jimmy Carter brought the Resolute Desk back to the White in 1979. It was used by every president thereafter in some capacity, including current Commander-in-Chief Donald Trump. Presidents are given great leeway as to how the Oval Office is decorated and the choice of office furniture. Trump replaced the red drapes that were place there during President Barack Obama's Administration with gold curtains. He also brought back President Ronald Reagan's designer rug, and sofas used by President George W. Bush.

Oval Office desks are part of American history as numerous important documents were signed on them.

A fire broke out at the White House on Christmas Eve, 1929. The fire and water damage to the West Wing ushered in drastic changes. The Grand Rapids Furniture Manufacturer's Association donated a new desk for President Herbert Hoover. It featured dark-stained wood. President Franklin Roosevelt kept the Hoover Desk throughout his Presidency. Both World War II declarations (Japan and Germany) were signed at the desk.

President Harry Truman removed the Hoover Desk from the White House when he took office. Despite the desk being named after Hoover, Roosevelt used it for much longer. It is now an exhibit at the Roosevelt Presidential Library.

The historical significance of this mahogany, two-pedestal-style desk dates back to the late 1800s. It was used in the Capitol Building as a workspace for the Vice President, who is the course the President of the U.S. Senate. President Nixon loved it so much when he was vice president that he moved it to the Oval Office after his inauguration.

Nixon believed the desk had been used by President Woodrow Wilson, and thus the name Wilson Desk. But it was actually named after Henry Wilson, who served as Vice President to Ulysses S. Grant. Nixon also had hidden microphones installed in the desk that ultimately played a major role in the Watergate investigation. President Gerald Ford used the Wilson desk after Nixon resigned. It was taken back to the Capitol Building thereafter.

Eco Office offers a variety of executive office furniture to our Bay Area clients. Give us a call today at 408-437-1700 to discuss your executive furniture needs.