The Evolution of Office White Boards 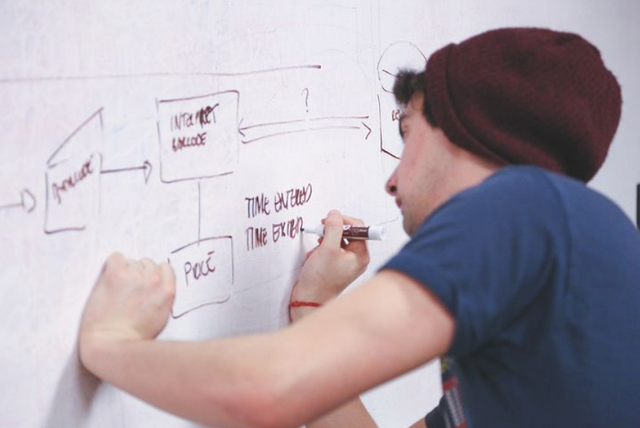 I was babysitting my friend's son Jake for a week while she attended Burning Man in 2013. He got in trouble at school for pouring laxatives in his teacher’s coffee cup. Long story short, I told him stories of some of my junior high exploits and tried to mold them into life lessons so he didn’t do any of those thing again.

I pulled a fire alarm at school when I was in seventh grade. The school was evacuated and the fire department and police showed up. My first punishment was having to mow the lawns of every firefighter and cop in town for the entire summer (good thing it was a small town). My second punishment was that I had to write the sentence "Delinquent behavior leads to prison" in cursive 1,000 times on the chalkboard. Jake's response: "what is cursive and what is a chalkboard?"

His reaction should not have been surprising. Cursive writing has mostly been eliminated from U.S. public schools via Common Core, but it's reportedly making a comeback. The chalkboard would taken a similar path in the 1960s had its successor caught on a bit sooner.

There are two stories as to who invented whiteboards. Marvin Heit, a photographer, is said to have stumbled upon the idea of whiteboards when he began writing on film with a felt-tip pen sometime in the 1950s. The ink was easy to wipe off, and you could write on the film again.

Heit took the idea and created a prototype dry-erase board utilizing similar coating on camera filmed. But a fire broke out at the Chicago Mercantile Mart, which was hosting the trade show that he was going to reveal his invention to the world. Unfortunately Heit's prototype was lost in the fire. He ultimately sold the patent to Dri Mark, the company that not only makes those markers that detect counterfeit money, but also makes dry-erase markers.

The other invention story is that of Albert Stallion, who worked for one of the biggest steel manufacturers in the United States. While working with scratch-resistant enameled steel, it's said that Stallion came up with an idea that would be an alternative to traditional blackboards. Regardless of which story is the most accurate, whiteboards became commercially available sometime in the 1960s.

Whiteboards really started taking off when the specialized markers got popular. Jerry Woolf, who worked for Techform Laboratories, invented the first marker made specifically for whiteboards in 1975. Pilot Pen patented the invention a year later. The EXPO dry-erase markers that are still widely used today, were also introduced commercially in 1976.

Whiteboards gained popularity in Europe in the 1980s. But it was not until the 1990s that whiteboard became an office and university mainstay in the United States. Calgary-based Smart Technologies took the dry-erase fad a step further in 1991 when it introduced the first interactive whiteboard. Today there are digital, internet-connected whiteboards that sell for $20,000 or more.

Eco Office carries a wide range of office whiteboards to fit the needs of both small and large offices. Give us a call today at 408-437-1700 to speak with a project manager.